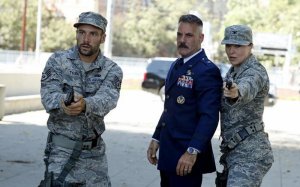 Back in May, I wrote about how Marvel’s Agents of SHIELD had finally found its way. As the show prepares to kick off Season 2, I spoke with its two showrunners, Jed Whedon and Maurissa Tancharoen for this Daily Beast interview about balancing secrecy and spoilers, what they learned from Season 1’s rocky start and which Marvel Universe characters will (and won’t) be making appearances this season. After having her hands tied for much of last season, being forced to keep quiet about, and then react to, the big reveal from Captain America: The Winter Solider, Tancharoen talks about the freedom of Season 2:

Well, we have a very clear big bad. We have Hydra. It’s very nice and liberating to say “Hydra” and have it out in the open! Last season was definitely challenging, because we were not allowed to mention them or allude to a mole of any kind. So now, coming into Season 2, we exist in a new paradigm. S.H.I.E.L.D. and Hydra are viewed as one and the same.  So we’re putting our characters through a different sort of journey, where they still want to be out there and helping the world and the people through this world, but they have to do it from the shadows.

They also discuss the possible return of Cobie Smulders as Maria Hill, Joss Whedon’s level in involvement in the show and — something of particular interest to me — if they will can finally take the periods out of SHIELD (which is something that I’ve already done on this site).