As USA’s drama Graceland returns Thursday night (at 10 p.m. ET) for Season 3, the show’s fans have just one question: did Mike Warren (Aaron Tveit)—who had flatlined at the end of Season 2, after corrupt FBI agent Sid (Carmine Giovinazzo) cut off his air supply at the hospital—survive?

The answer seemed obvious to me—of course Mike wasn’t going to die, because a show that needs all the viewers it can muster would never jettison its most popular actor (Tveit has spawned hundreds of stories like this; the internet can’t get enough of him)—but when I recently visited the show’s Fort Lauderdale set, Tveit was nowhere to be found.

No, that doesn’t mean that he’s off the show. More likely, the network figured that the best way to keep his fate quiet was to keep him far away from reporters.

Tveit’s on-set absence aside, there’s no doubt that he is still part of the cast, and is prominently featured in the Season 3 key art. 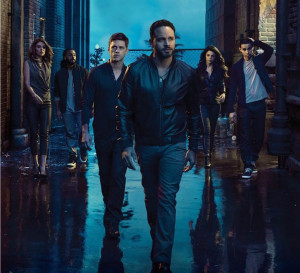 While USA wants to keep the details of his fate under wraps until Thursday’s premiere, consider this: the show hasn’t suddenly taken a supernatural turn (so Mike isn’t a ghost), nor has it gone the Lost or Orange is the New Black route (i.e. heavy flashbacks). So, that leaves only one clear answer as to whether he survived.

Stil, Tveit’s costars insist they weren’t sure if he would ultimately be a part of Season 3 or not. “I personally didn’t know,” says Sunjata. “They certainly left it so ambiguous, even to us, that it was a big question mark hanging in the air, even to us. And then we finally found out the capacity in which — especially in the season premiere — that he would in some sense be back, that was a surprise too.”

2) This season is all about atonement.

As the one who tipped off Sid about Mike’s location in the Season 2 finale, Paige will have to answer for her actions this year. But she’s not the only: atonement is a key theme of Season 3. “Everyone in the house has atonement to do, has sins that they have to atone for, and karma, chickens that come home to roost – quite literally. There were some chickens in the last scene!” says Sunjata. “Everyone’s got some sins to atone for. Everybody’s trying to even the scales.”

But in doing so, they seem to be only making things worse: “There’s a lot of blood this season. There’s been some spillage of the sangre,” says Sunjata. 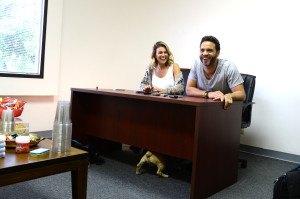 As part of the aforementioned atonement, Briggs is still haunted by the existence of a tape which recorded his killing FBI Agent Juan Badillo (in sort-of self-defense) back in in Season 1. “This has been a dangling plot thread from season one that fans have known was going to come back,” says Sunjata.

After two seasons of lurking in the background, it finally does. “First episode, the tape is back front and center, and it’s used as leverage in a big way,” says McLaren. “And that leverage is exercised for the entire season.”

4) The whole gang is finally back together.

While the events of Season 2 served to drive the six housemates apart (often literally), this year is about reestablishing the group. “They’re trying to bring the house back, because the fans love that. They like seeing us together,” says Ferlito.

“We do come back as a unit in Season 3,” says McLaren. “I think everyone realized after the events of Season 2 that we do need each other. If we’re all islands in the house, bad things typically happen. So there’s a concerted effort this season to try and come back together and be there for one another.”

While Jakes moved out of the house at one point last year, “everybody’s in the house” this season, says McLaren (providing another clue as to Mike’s fate). “We’re all working on a big thing.”

That “big thing” is this season’s major story arc, about the Armenian Mafia. “Briggs goes undercover and it has something to do with the Armenian Mob and ends up needing the help of his housemates in order to get certain things done,” says Sunjata.

Charlie discovered she was pregnant at the end of Season 2, and as of the first few episodes, she still is. “It hasn’t really hit her yet. It’s still very early on. She’s still in the house and still running around with crazy people,” says Ferlito. “She’s just out of control” as she tries to enact revenge on the money launderer who nearly killed her” and her unborn child.

Ferlito estimates that Charlie is about two and a half months pregnant. “ Everyday I’m like, “Am I losing the kid? What’s up? What’s going to happen?” she says. “I could make it through the whole season [without showing]. We could show up Season 4 with the baby—or not.”

6) Briggs and Charlie are on the outs.

While Briggs is the father of her baby, Charlie can’t forgive him for his Season 1 deceptions, which came to light last year. “Briggs and her, obviously they’re struggling. I don’t know if they can ever mend that, what happened between them. How can she ever trust him?” says Ferlito. “We’re not on good terms right now. I’m like, Jesus Christ, will I ever get to make out with Daniel Sunjata again? It’s just unfair!”

Ferlito hopes they patch things up, and not just so she can kiss Sunjata. “Charlie and Briggs, I think it’s real what they have,” she says. “I think Briggs and Charlie will always be in each other’s lives. It’s hard not to write that for us, because we really love each other in real life. We’re really good friends.”

While the season is just getting under way tonight, some of the actors are already anticipating what’s to come as the year wraps up.

“If Season 3 finishes the way they’re talking about it, it’s going to blow people’s minds,” says Montana. “Because when I heard, I was like, ‘How are we going to do that?’ But I loved it.”

“There’s stuff happening towards the end of the season that will forever change the dynamic of the house,” adds McLaren. “If what happens is meant to happen, Season 3 will be nuts!”