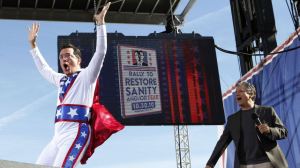 The news that NBC is developing a weekly live sitcom called Hospitality took many by surprise, but not me. During TCA summer press tour, I had chatted with NBC Entertainment Chairman Robert Greenblatt, who told me this summer that he had been looking to do just that. As I wrote at Quartz,

“We do it with sporting events, music competition shows and reality shows. There’s a lot of live things on television,” Greenblatt told Quartz in July. “The Today show is live every day; The Tonight Show is taped within hours of its broadcast. There’s a lot of immediacy, but not in scripted programming. So we’ve been talking about doing a live sitcom. We just have to find the right show.”

If the show ends up on the air, it will be the first weekly live primetime series since Fox’s Roc in 1992, which not coincidentally was overseen by Greenblatt, who oversaw Fox’s primetime programming at the time.

Why NBC is working on a live sitcom