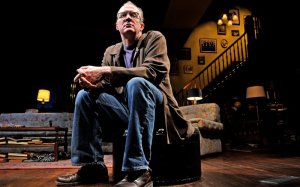 It’s not often that I feel like I’ve unearthered tons and tons of new material from a subject, but that’s exactly what happened when I spoke with the brilliant Tracy Letts for this Daily Beast profile about his role on Homeland (he plays Sen. Andrew Lockhart), and the upcoming movie August: Osage County, which he adapted from his Pultizer-winning play. He was full of great stories, and didn’t pull any punches, like when he talked about the Oscar buzz surrounding August:

However, Letts is upset that the early reaction to August has been almost entirely in terms of its Oscar potential. Though he says “I hope it wins everything,” Letts admits that the awards season mania is “beyond frustrating. Man, this obsession with the Academy Awards in particular, who fucking cares? It drives me nuts. How the fuck are you going to compare Gravity with August: Osage County? Could you have two pieces any more different in every conceivable way? They’re both in color and they both have George Clooney involved with them [who is a producer on August], and that’s it. So I don’t know how or why you’re supposed to compare these things.”

He also talked about getting married in the hospital after emergency gall bladder removal, a story that seems like it should be a part of whatever he writes next. Also, Homeland showrunner Alex Gansa tells me about wooing Letts for his first role in front of the camera since 2006.