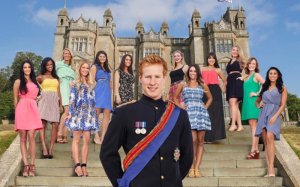 No. Just, no. Proving that it has learned exactly zero lessons since foisting The Next Joe Millionaire upon the public, Fox has once again failed to clone its 2003 reality mega-hit, Joe Millionaire. This time around, we’re stuck with I Wanna Marry “Harry,” in which 12 dimwits vie for the hand of a man they think just might be Prince Harry. As I wrote at The Daily Beast,

Instead of upending the genre as Joe Millionaire did, the inert Harry mostly shows how much things have changed since then. Very few Bachelor viewers—despite the efforts of host Chris Harrison—wholly buy into that show’s fairy-tale storyline anymore. The turning point came in 2010, as audiences were exposed to the creepy serial killer vibe given off by Jake “Stop Interrupting Me” Pavelka during his nasty on-air split with “winner” Vienna. Then, there was a near revolt this past Bachelor season, as almost all the women (and even Harrison himself) ultimately turned against Bachelor Juan Pablo Galavis as a result of his douchey behavior both onscreen and off.

Now, many contestants and viewers have realized that the real way to “win” The Bachelor/Bachelorette isn’t by becoming the last suitor standing and getting engaged. Instead, the key is to play your cards right and score the better prize: either become the runner-up who was compelling and beloved enough to be selected as the next Bachelor/Bachelorette, or embrace the villain(ess) persona that’s a direct ticket to getting booked on spinoff shows like Bachelor in Paradise (airing this summer). Continued employment, not true love, has become the real Bachelor allure.

If you wanna watch Harry, you’ll only get an uninspired retread of a once-revelatory idea.