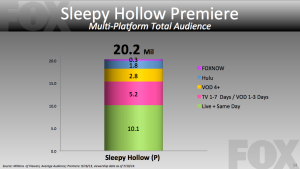 Hundreds of reporters have assembled at TCA summer press tour, but as far as I’m aware, I’m the only one who wrote a detailed story about the fascinating panel with CBS, FX, Fox and Showtime’s research gurus, who talked about how audiences actually watch TV now.

“We’re in a new era of television,” said David Poltrack, chief research officer for CBS, noting that weekly TV viewing has increased 2% over the last three years, from 35 hours and 36 minutes to 37 hours and 50 minutes. “This is a golden era of television content, and the public is embracing television and engaging with television in a way that they never did before, because it is so much good programming.”

While I usually try to summarize my stories a bit here, there’s so much terrific information throughout the piece about delayed viewing lifts and multi-platform audiences that I urge you to read the whole thing yourself.

Charts: How we watch TV now